"It's always darkest before it's completely black."
-Mao Tse Tung

Well good morning, internet! How are you? composed exclusively of ones and zeroes, i'm sure. I know it's been awhile since my last post, but I'm back, and i feel like a hydrogen bond; Weakly attracting and being attracted to other water molecules, allowing ice to float and certain insects to walk on the surface of especially still water.

Anyway, i'm feeling like i woke up in a different dimension today. Not completely different, you see, just a little bit different. Like maybe a dimension where paperclips don't exist or function in a different way, just something that perhaps you wouldn't immediately recognize, but is totally different none the less. So, in this vein, i think i'll post here my Time Machine, Pieces. These aren't new, i did them as a project for my children's book illustration class. They turned out a little terrifying for a children's book, but i like them none the less. they're all done on Scratchboard. 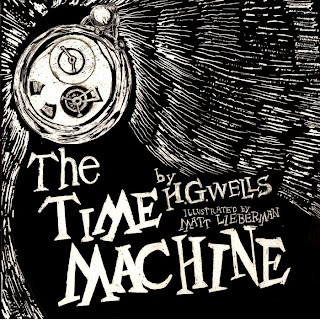 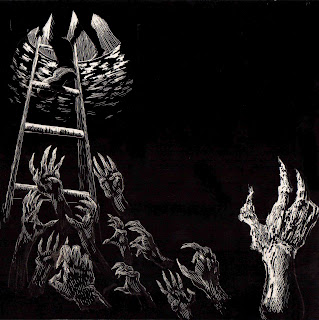 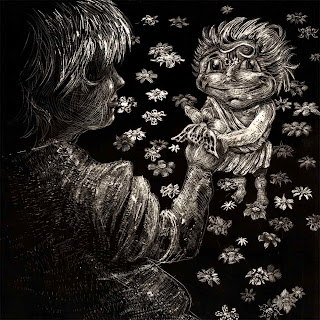 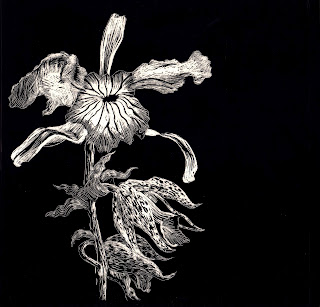 Posted by MATTPOCALYPSE at 12:07 PM No comments: 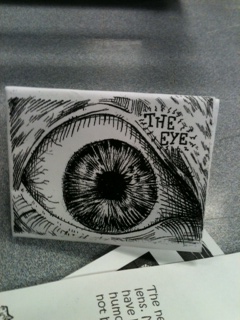 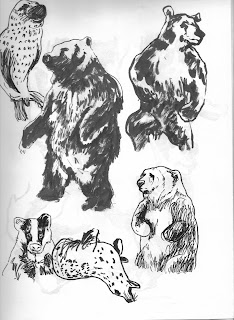 So, over the past couple days I've drawn over a hundred Bears and a handful of owls. i figured i'd post some of 'em here, as i literally have nothing better to do. They're all very quick sketches, none exceeding 5 minutes and most 1-2 minutes; i know, because i timed myself. Yeah. That happened. What i'm doing here is slowly but, rest assured, surely mentally cataloging the shapes and nuances of the beasts. I'm working towards creating a set of animal Norse gods, Odin, Loki, Heimdall, Thor, et al. maybe making a Children's Book or perhaps an ultra-violent web comic or something, i haven't decided. It will be challenging to square the massive amount of violence and sex from the source material (i'm getting it from "The Norse Myths" by Kevin Crossley-Holland) for a children's book, but we'll see how things shape up. Oh! Heimdall will be some kind of owl, a snowy owl maybe, and Odin will, of course, be a bear. I think i'll make all the Aesir, with the exception of Heimdall, members of Caniformia, Bears, Dogs, Seals, Raccoons, walrus' and the like. anyway, Here are the sketches. 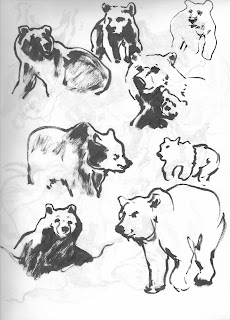 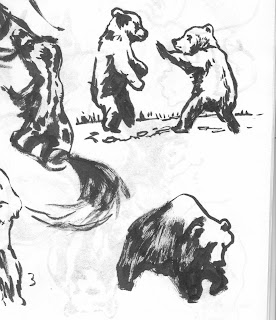 It hits all by itself. 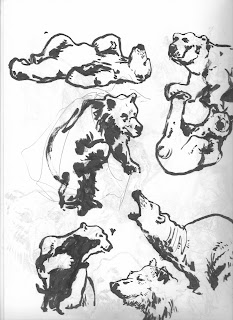 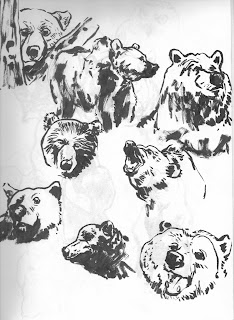 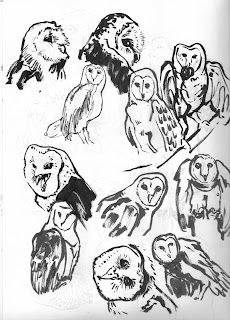 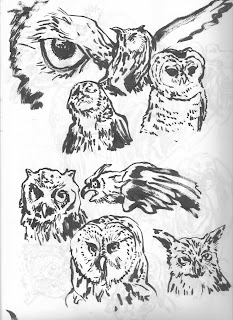 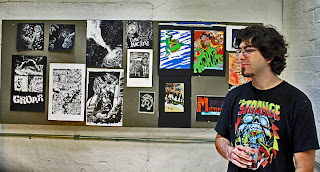 Well, it was Art Walk (again?) last weekend here in Ventura and, like many artists around town i opened my studio to the comings and goings of throngs of people. I donned my beloved Dr. Strange T shirt and opened my doors to the churning, throbbing masses. I met a lot of interesting people, their names flickering in and immediately out of my head like so many firefly's. A woman brought me a wine and iced tea mixture that I've never tried before (a little fruity, but not bad), Notably, an incredibly cute and well mannered little boy, Shea, drew me a picture of the batman and two of his greatest foes. 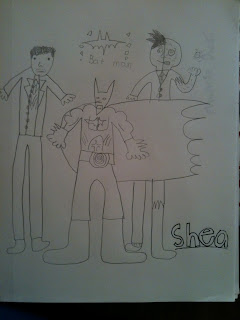 Evidently, Shea has a website set up by his mom (for the life of me i cant remember her name, i apologize.) where he sells t-shirts with his superhero art on it. I, like a fool, didn't get the address so, Shea or Shea's mom, if you're reading this, comment! e-mail! stop by! do whatever you can! I would not only be happy to plug your site here, but i would absolutely love to buy a shirt or two! Anyway, all and all it was a good couple days, the first day better than the second, as the very old, the majority of the Sunday crowd, tend not to like my work. I mean we're talking very, very old, 75+, fresh from some fire and brimstone Sunday service, i'm sure, with no interest in what they referred to with a scoff as 'comic art'. No matter, they'll be dead very soon and even now their tastes are ancient and meaningless. But, i'm not bitter! In the end, though i didn't sell much, I gave away over a hundred fold-up comics (Now posted here) many, many business cards and met a ton of interesting people. I even ended up seeing a transvestite Moulin Rouge dance revue at a local gay bar for the after party. All and all, i had a lot of fun and spread the tendrils of my empire further and further. Truly, the age of Mattpocalypse will soon be upon us.

Oh! also, i was mentioned in an article in the Ventura star, here!
Posted by MATTPOCALYPSE at 10:46 AM No comments: 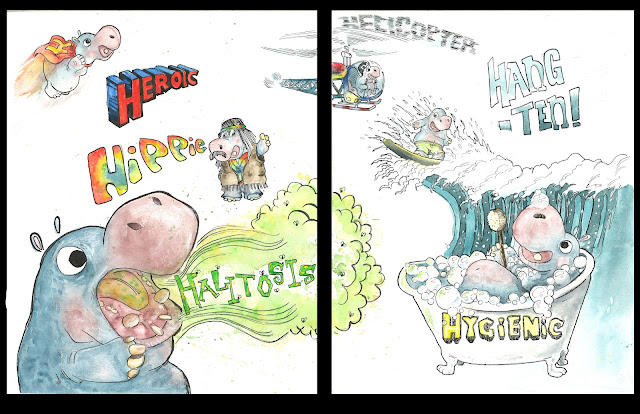 These hippos brought to you by the letter H. indeed.

Posted by MATTPOCALYPSE at 5:12 PM No comments:

Evolution and the Eye

salutations, space cadets. What follows is the transcript and images from my mini fold up comic on the evolution of the eye at the end i'll include the printable files so you can make your own, free of charge no less! enjoy. 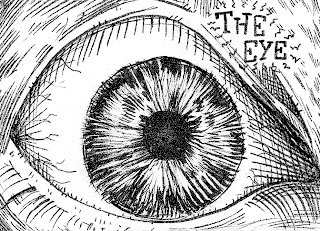 The eye is an intricate, amazing and absurdly useful organ; to imagine it as a product of evolution boggles the mind. To be sure, the evolution of the eye is complex but certainly not irreducibly so. The steps in its evolution are ultimately easy to follow and, indeed, demonstrably true. For one to understand the progression of this evolution one needs some imagination, as well as cold, hard facts and living examples of the several in-between phases of the eye as we know it today. 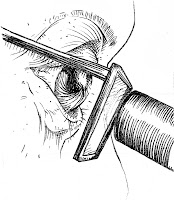 The first stop on our journey is the mild-mannered, unicellular Euglena. Near its whip like flagella, a small sheet of light-sensitive proteins has-evolved through the random nature of genetic mutation. These “eyespot’s” only real ability is to sense the difference between light and dark. Although this may not seem like much of an advantage, it is certainly better than blindly bumbling around. Because of its advantages the ‘eyespot’ was favored, passed on to, and improved on by other organisms like the flat worm. If one pictures the original light sensitive proteins as a flat sheet, then the next logically advantageous step would be for this sheet to become concave, like a bowl. Why is this concave shape preferable? Think about it. If you hold a bowl up to a light one very important fact can be ascertained: the direction of the light. This is exactly the kind of eye flat worms have. It enables them to recognize, say, the safety of a cave, but not enough to distinguish much else from its surroundings. 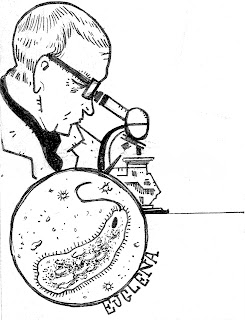 Because of its advantages the ‘eyespot’ was favored, passed on to, and improved on by other organisms like the flat worm. If one pictures the original light sensitive proteins as a flat sheet, then the next logically advantageous step would be for this sheet to become concave, like a bowl. Why is this concave shape preferable? Think about it. If you hold a bowl up to a light one very important fact can be ascertained: the direction of the light. This is exactly the kind of eye flat worms have. It enables them to recognize, say, the safety of a cave, but not enough to distinguish much else from its surroundings. 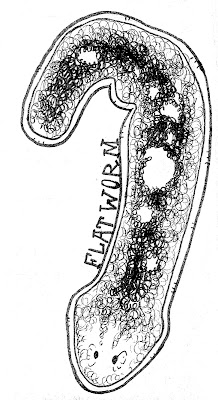 The next stop on our journey (our unofficial mid-point) would be the precursor to much of the tentacle’d life in the ocean today--the Nautilus. As our rudimentary eye becomes more and more concave, the edges of the ‘bowl’ come close to touching, creating a small pinhole  for light to filter through, not unlike a pinhole camera. Although the images, if one could even call them that, are blurry and largely indistinguishable, the nautilus is now able to differentiate objects from their surroundings. The advantages of this eye are great. It simultaneously allows its user to easily flee from predators and catch more prey. 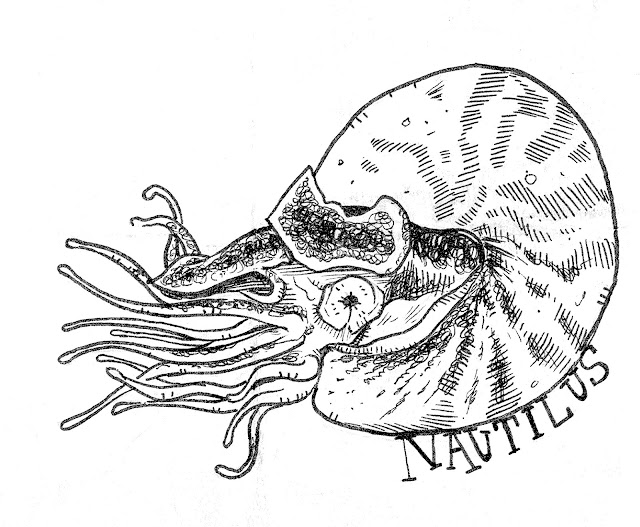 The next step is somewhat harder to imagine: the development of the lens. Modern lenses are indeed complex, but their ancestor need not have been. The first step would be the development of the aqueous humour, or the gunk inside ones eyes. To start with, this gunk need not be anything special. Any clear, viscous liquid will do. It allows the light to be focused as it travels through the eye to the light receptors in the back. The Sea Snail is one of the animals who have done just that. Around the creatures ‘eye holes’ a pocket has formed, capturing somewhat thick plasma-like liquid, enabling it to see much better than any of its antecedents. 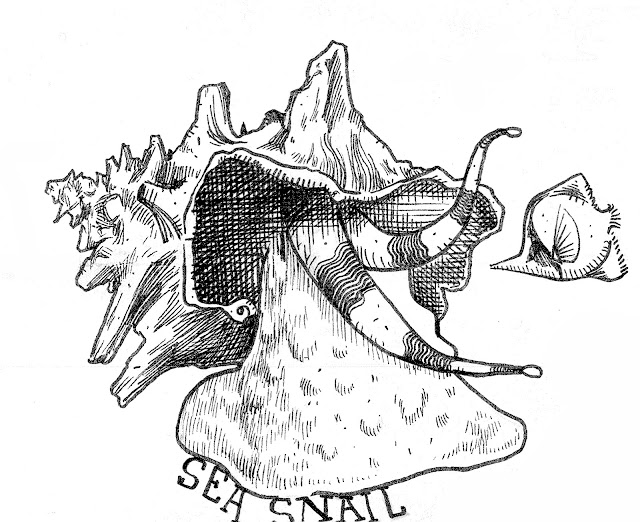 If one imagines a bowl of pudding sitting in a refrigerator, eventually forming a thicker skin on top, the next step in our process is easy to understand.  As this ‘skin’ formed it created the different layers of the eye as we know them today, the lens, the sclera, the cornea, etc. it’s easy to see (no pun intended) how advantageous this evolutionary step was and is. The more useful something is, the probability of it being passed on increases greatly. As the advantage, whatever it is, is passed from generation to generation, from organism to organism, the chance of it beneficially mutating increases and increases. Ultimately, after millions of years we end up with the multitude of creatures, the vast majority on earth, with the ability to see and to see in amazing ways. It is said the Tools of evolution are time and death, understanding this makes the evolution of the eye not only comprehensible but a virtual inevitably on a world such as ours. 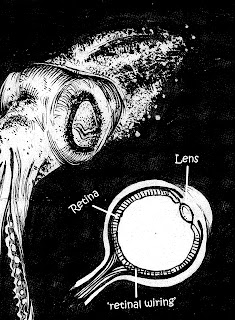 Thanks to: Richard Dawkins and Dan-Eric Nilsson
Videos here and here. 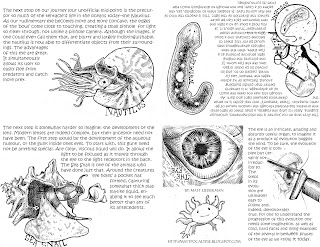 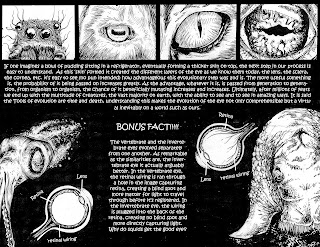 Posted by MATTPOCALYPSE at 5:05 PM No comments:

Here's a series of ink drawings outlining the effects of the fungus Cordyceps, specifically Ophiocordyceps Unilateralis, on a species of south american ants. May sound a little stuffy, i know, but actually is quite interesting and somewhat ominous and terrifying. Stop me if you've seen the episode of 'Planet Earth'...

1. A group of ants, probably Camponotus leonardi, making their way through the south american rain forest back to their lair. 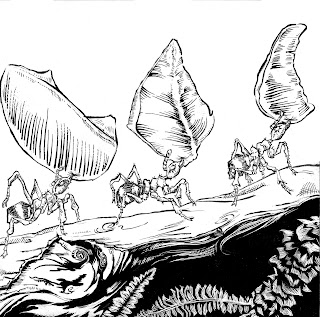 2. An ant is infected by the spores of the fungal growth. the fungus grows out of the dead husk of another ant, grimly foreshadowing this ants future. The ant does not take the hint. 3. Once in, the fungus begins to consume the ants softer organs, as it simultaneously spreads itself to the ants brain and motor controls, assuming near complete control of the ants movements. 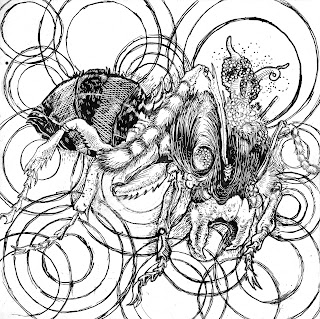 4. Finally, the fungus maneuvers the ant towards the nearest leaf, with a few oddly and incredibly specific guidelines: The leaf must be about 8 inches off the ground, the ant must bite down on the north side of the leaf, the environment must be between 94 and 95 percent humidity and the temperature must be between 68 and 84 degrees F. The Fungus finally kills the ant, once it's chomped the leaf. 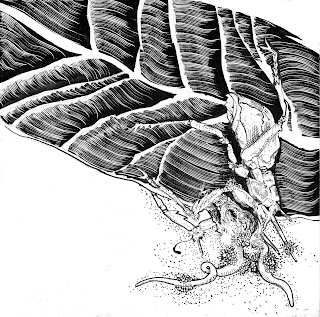 Whew! That's one picky damn fungus. at least it knows how to get what it wants. Most of the information for these drawings was advised by the 'Scientific American' article linked at the top. Fascinating article and an amazing creature that brings up some very interesting questions. How did something like the Coryceps Fungus evolve to target these ants so specifically, and so devastatingly? I should also mention the the ants have evolved to recognize the symptoms of the fungal infection and they deal with it by carrying the infected member of the hive as far away from said hive as possible. Science, man.

Posted by MATTPOCALYPSE at 8:05 PM No comments: 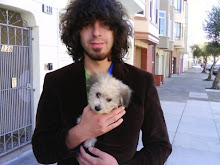